To participate, you must create a profile and join this project

This project aims to test — and push — the northern limits of a large-fruited species of prickly pear cactus (Opuntia stricta), native the U.S. Southeast, along with O. stricta hybrids and other large-fruited species. Of particular interest are strains with readily edible young pads as well.
Description
Prickly pear cacti provide popular food across tropical regions of the world, though the genus is native to the Americas. Most commonly grown for the sweet fruit, colorful-fleshed fruit, the species Opuntia ficus-indica is the most famous, but many other species are commonly eaten or juiced. In Mexico and other places, the fully-formed young pads are a common vegetable (known as nopal, singular, or nopales, plural). A low-growing, small-fruited species known as Opuntia humifusa grows along the U.S. east coast as far north as New England, but it is the relatively large-fruited species called Opuntia stricta that is of interest here. Native as far north as North Carolina or possibly Virginia, Opuntia stricta is the tallest and largest of the cold-hardy prickly pears. The fruit grow to roughly 3 inches long by 2 inches wide. The deep red-purple flesh is quite tasty, a pleasing mix of sweet and tart. Additionally, the fruit were recently found to contain among the highest amounts of betacyanins (the same antioxidant pigment that gives red beets their color), compared to other prickly pears, which means it has medicinal or nutritive uses that have yet to be fully studied. It has large pads that grow similarly to nopales, but little is known about its possible use as a vegetable. This plant was not on our radar until I found a patch growing in a south-facing front yard in southern New Jersey (shown in photo). It appears to be quite mature, and was well laden with fruit when I came across it in 2017. As of March 2018, I'm attempting to sprout many seeds after preparing them in three different ways (dried fresh from the ripe fruit, dried naturally after slowly rotting indoors, and stratified outdoors over the winter while kept moist in the rotten flesh of the fruit). Hopefully one or all of these methods will produce a plethora of seedlings. I intend with this project to send seeds and/or seedlings to volunteers across the northern United States to test the limits of this hardy species. Where it was found in New Jersey is considered USDA Zone 7, but winters sometimes get quite cold here, dipping into temperatures more typical of Zone 5. I'm willing to send seeds (once we learn how to best germinate them) and seedlings to volunteers as far north as Zone 4, or possibly colder. I'm also interested in identifying cultivars with particularly large fruit and/or readily edible young pads. This project will begin with Opuntia stricta (grown in the presence of Opuntia humifusa), but intentional hybrids and other species will be included as I get them from other growers and researchers.
Researcher background
Co-founder of EFN. See bio in "About" section.
Are you seeking volunteer growers or other types of volunteers?
Yes, seeking volunteer growers
How many volunteers do you need?
30
What will you ask volunteers to do?
Volunteers will be asked to grow and observe these cacti over the next few years. It will likely take 5 years or so before all of the characteristics of each plant become fully apparent. Volunteers are requested to grow at least five or ten plants in a sunny spot where they expect to be able to maintain the plants for at least five years. Plants should be kept well weeded and not be sprayed with any chemicals.

Annual or twice-a-year reports on winter survival will be the most important metric, but qualitative analysis of fruit size, yield, and flavor, as well as pad edibility, will be of interest as well. Live pads (the easiest way to propagate this species) and/or seeds from exceptional plants will be expected to be returned at some point, once evaluation and comparisons are made. Photographs throughout the process will be encouraged.
Other requirements of volunteers?
Volunteers with a variety of soil types, to as cold as Zone 4 or 3, are sought.
Is this a multi-year project?
Yes
Can volunteers expect to be able to keep some germplasm (seeds, bulbs, cuttings, spores, etc) at the close of the project?
Yes, of course
Anything else?
Volunteers should always wear gloves when working with this species, and the gloves used should only be used for this purpose. Many Opuntia species, including this one, not only have long spines, but also minuscule hairlike spines called glochids that are painful and very difficult to remove once they enter the skin.
Researcher Location

I have a small prickly pear farm near Sterling Kansas and I would like to join this project. Currently I am growing opuntia humifusa, opuntia engelmanni, opuntia ellisiana var texana and opuntia cacanapa ellisiana, and a cultivar called Party Favor. Can anyone send me some pads? I'll pay shipping.

Hoping to get seeds next year and try growing them. Have an area with several types of opuntia, want to try the cholla small tree/bush form here in southern WV next year. Maybe flowering in the red tones.

I brought up 4 cactus pads from the SF Bay Area in January and left them to harden off the cuts. Then I put them individually about 1/3 of the way down in big pots of cactus mix potting soil and didn't water them until I began to see some growth indications. Sparingly watering and letting the soil completely dry out before watering again and keeping them in my unheated high tunnel on a table, they began to put out new pads and bloom tunas. I moved the biggest one with the most pads outside for the summer. See photo. Eventually, I will plant it in the ground where it is now. The cement block building will provide protection from the southwestern wind storms as it grows larger. 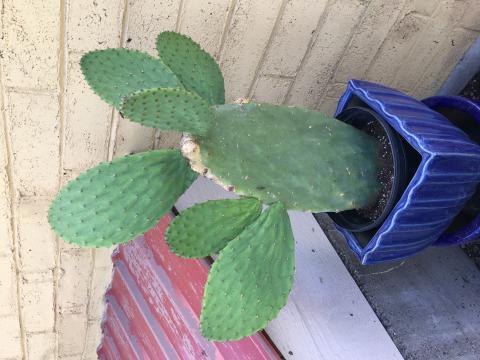 so far no germinations, I'm still trying however as I see many people said it took months for them as well! Would love for to get pads from someone if I don't get the gemination going! its been about a month so far. same with my yaupon holly, these and the Hancock ground cherries are the only things that haven't germinated for me yet.

I am not sure this is the correct place to inquire. I am trying to find out if there is a variety of edible Nopales Cactus I can acquire that are hardy in climate zone 6b. Any help would be appreciated.

Got pads from Charlie Little (see his post here) three months ago - and they are apparently rooted and begin to grow now. 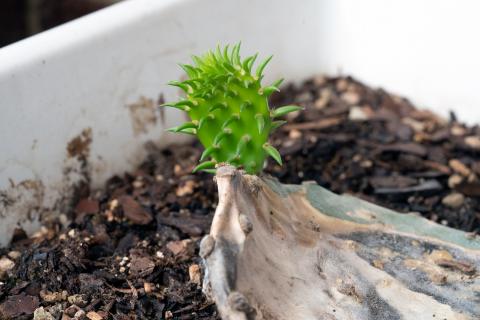 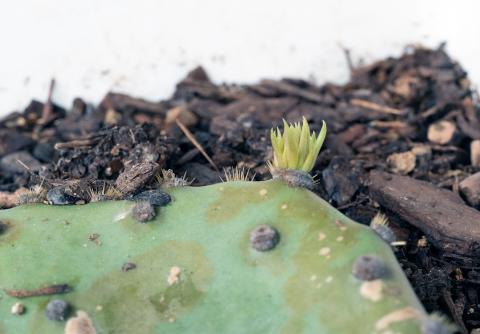 It turned out incredible hard to germinate prickly pear seeds but three out of many tens did it.
Update of 09/06/2019: after some three months more little cacti emerge... 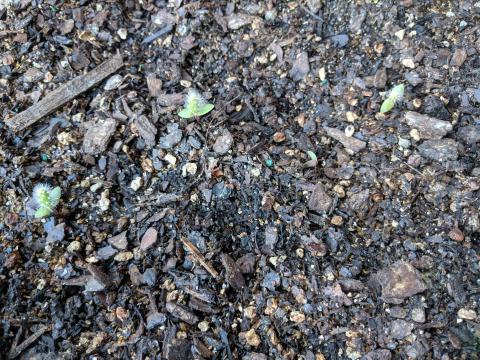 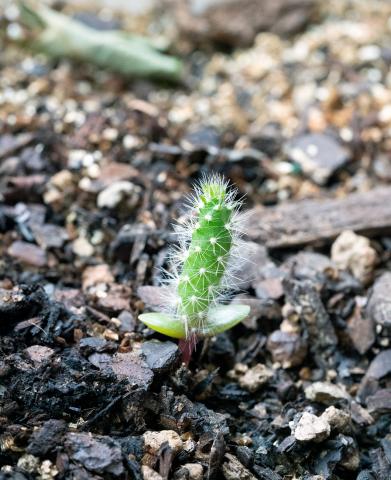 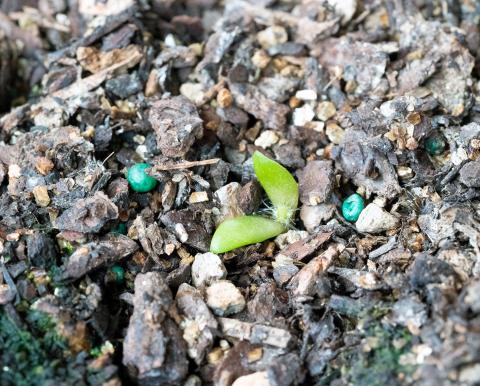 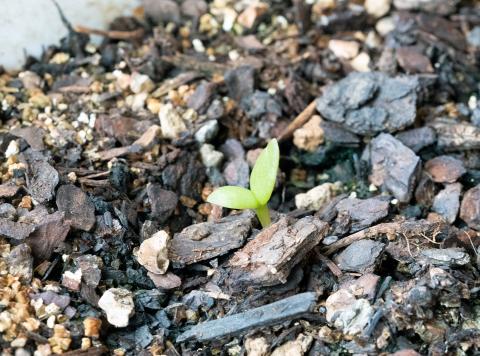 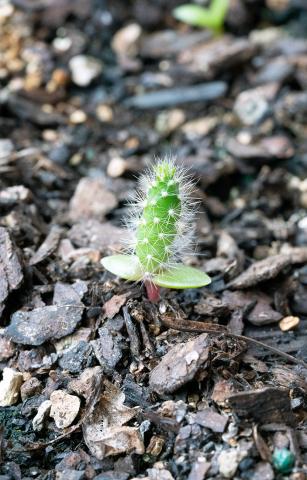 I was looking around at prickly pears and happened upon your site and project, hope I may be of some help.

Was given a bunch of pads from a large cactus I was later told was Opuntia lindheimeri var. subarmata by some folks in a facebook cactus group, however on seeing your project photo, I now believe are or are closer to O stricta.

These are easily propagated by cutting off a section of pad, laying it down on a soil surface and forgetting about it. Every areola is a potential new plant as the attached photo's will show. Seeds do not germinate well compared to other cold hardy Opuntia. I have only gotten a few to sprout.

They take a lot more moisture without rotting compared to some other Opuntia but as cactus go, they survive without ever hand watering.

I have many of these now and happy to share pieces of pads with group members. 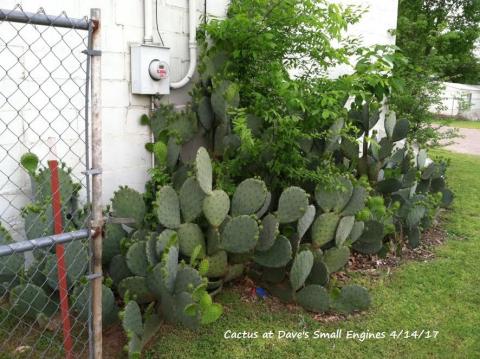 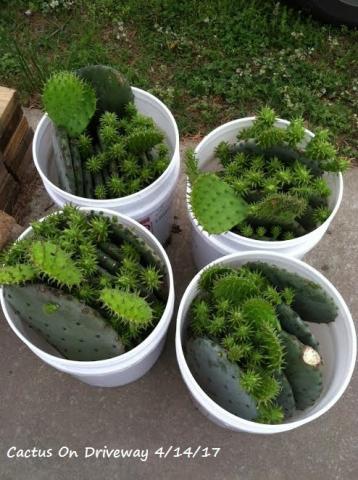 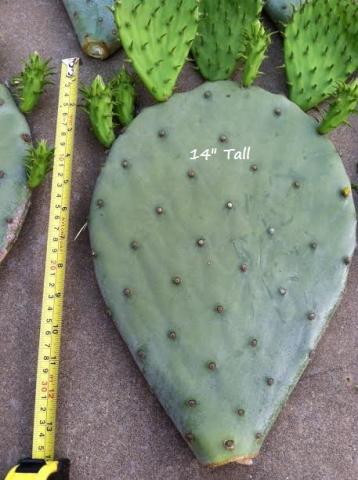 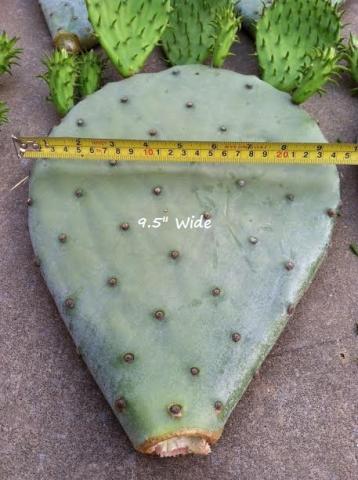 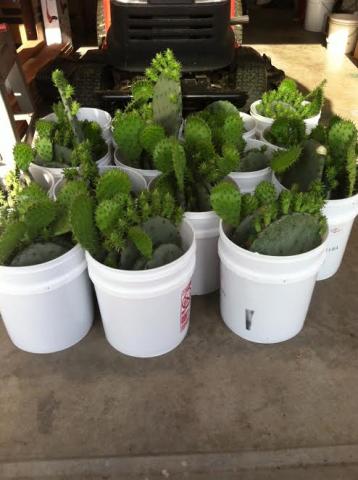 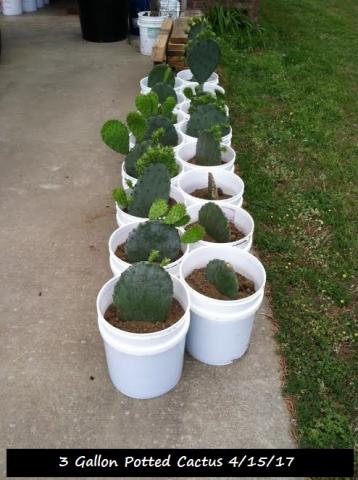 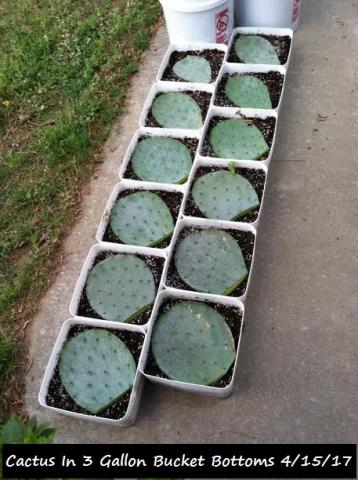 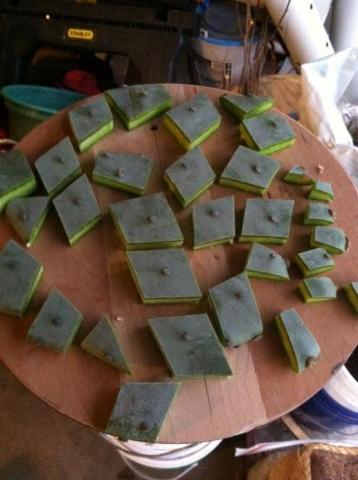 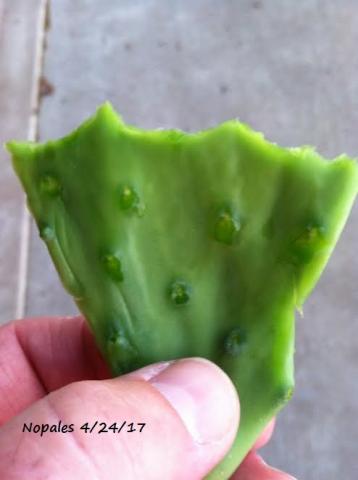 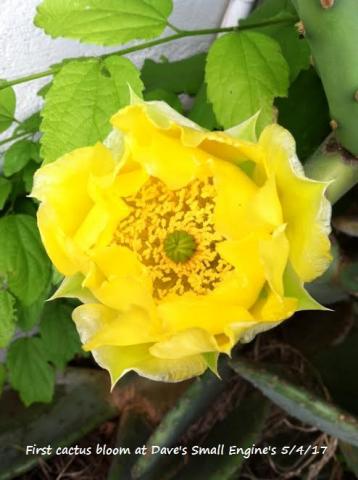 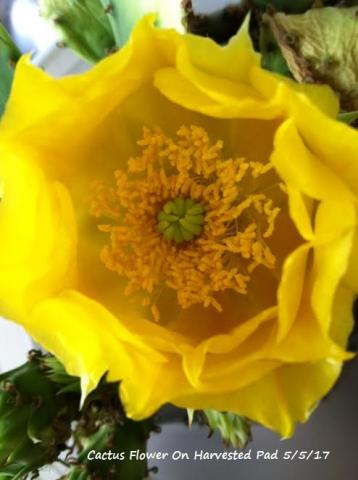 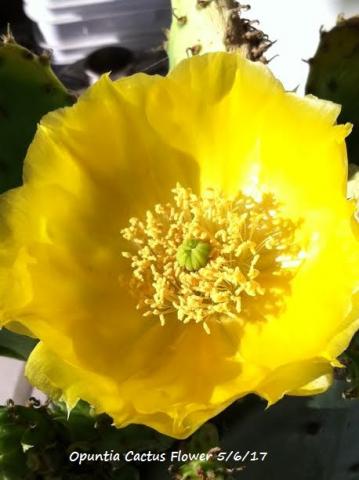 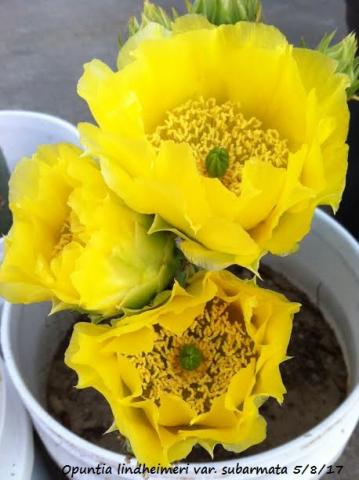 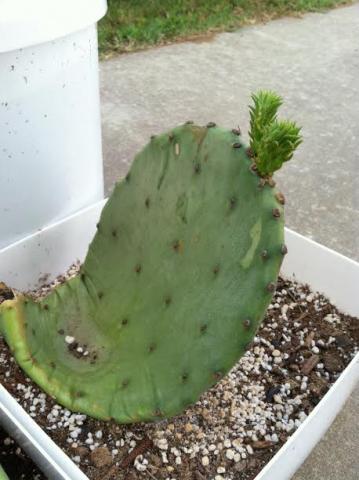 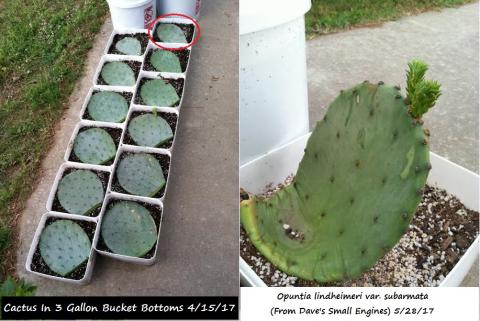 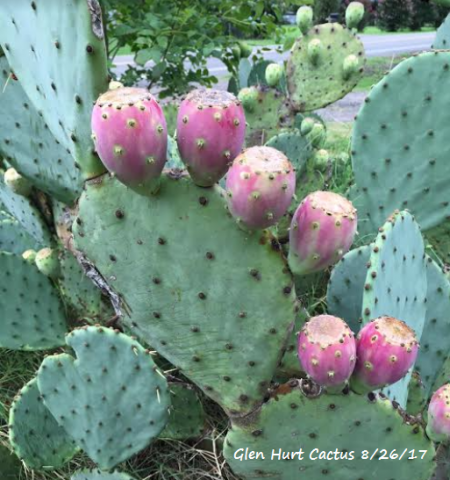 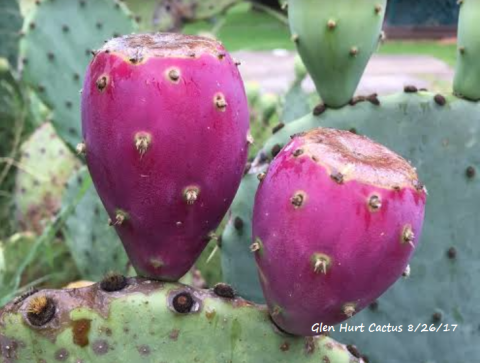 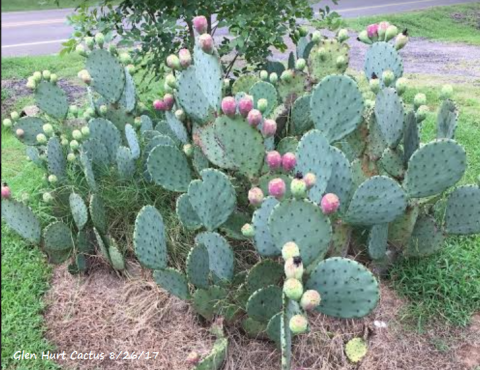 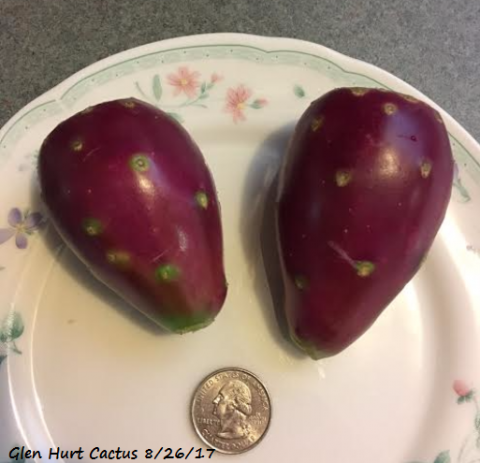 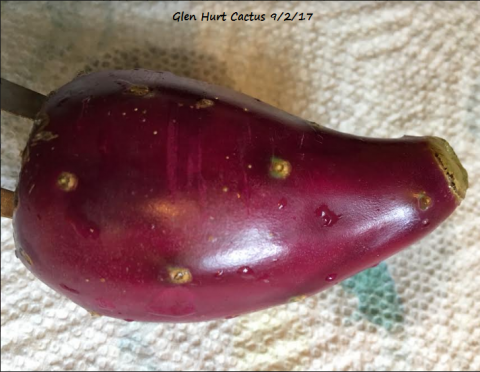