To participate, you must create a profile and join this project

This project aims to evaluate the efficacy of two perennial species of sword bean (Canavalia ensiformis and Canavalia gladiata) as an annual companion plant for tree crops in temperate climates. Traits under evaluation include nitrogen fixation, weed suppression, and allelopathy, as well as day-length sensitivity and seed production (in order to determine the geographic limits of where tree farmers can save sword bean seed for yearly use).
Description

Sword bean is the common name used for certain species in the genus Canavalia, including the two under study here — Canavalia ensiformis (more commonly referred to as "jack bean") and Canavalia gladiata (typically just called "sword bean"). Sword beans are tropical perennial legumes noted for their use as companion plants. While a minor food crop as well, these species are considered most useful for nitrogen fixing and weed suppression, while extracts of C. ensiformis have also been found to inhibit certain plant pathogens. Seeds are difficult to come by, but there are some commercial sources. 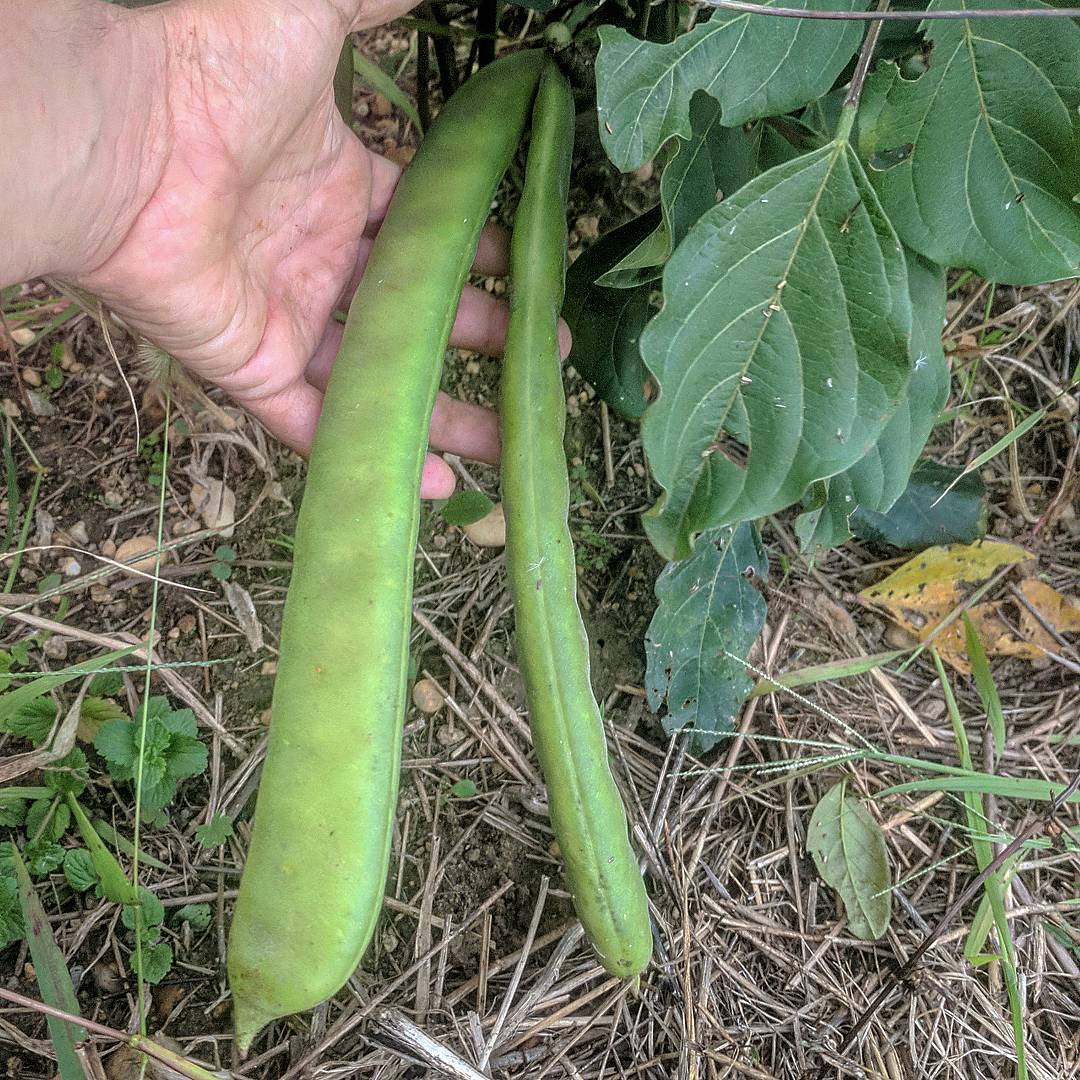 I first encountered the Canavalia plant in Puerto Rico, at the agroecological student garden at the University of Puerto Rico - Rio Piedras (which I visited during the student strike of April 2017). The students were growing a bush-type sword bean among other plants in their garden. I was not able to collect any ripe seeds there. Later in the same trip, a seed saver in the town of Hatillo (Julio Lopez) gave me a few seeds of each species, some of which were subsequently grown at the EFN flagship farm in Elmer, NJ. Only the C. ensiformis accession produced seeds in New Jersey, but the C. gladiata accession produced large amounts of biomass. I recently received a large bag of C. gladiata seeds from a commercial source (Sheffield's Seeds). Those seeds were similarly colored, but smaller and not as long as the seeds from Julio. The Sheffield's seeds will be distributed to interested EFN volunteer growers during the 2018 season, while just a few growers work to increase stocks of the two Puerto Rican accessions for further study in subsequent years. 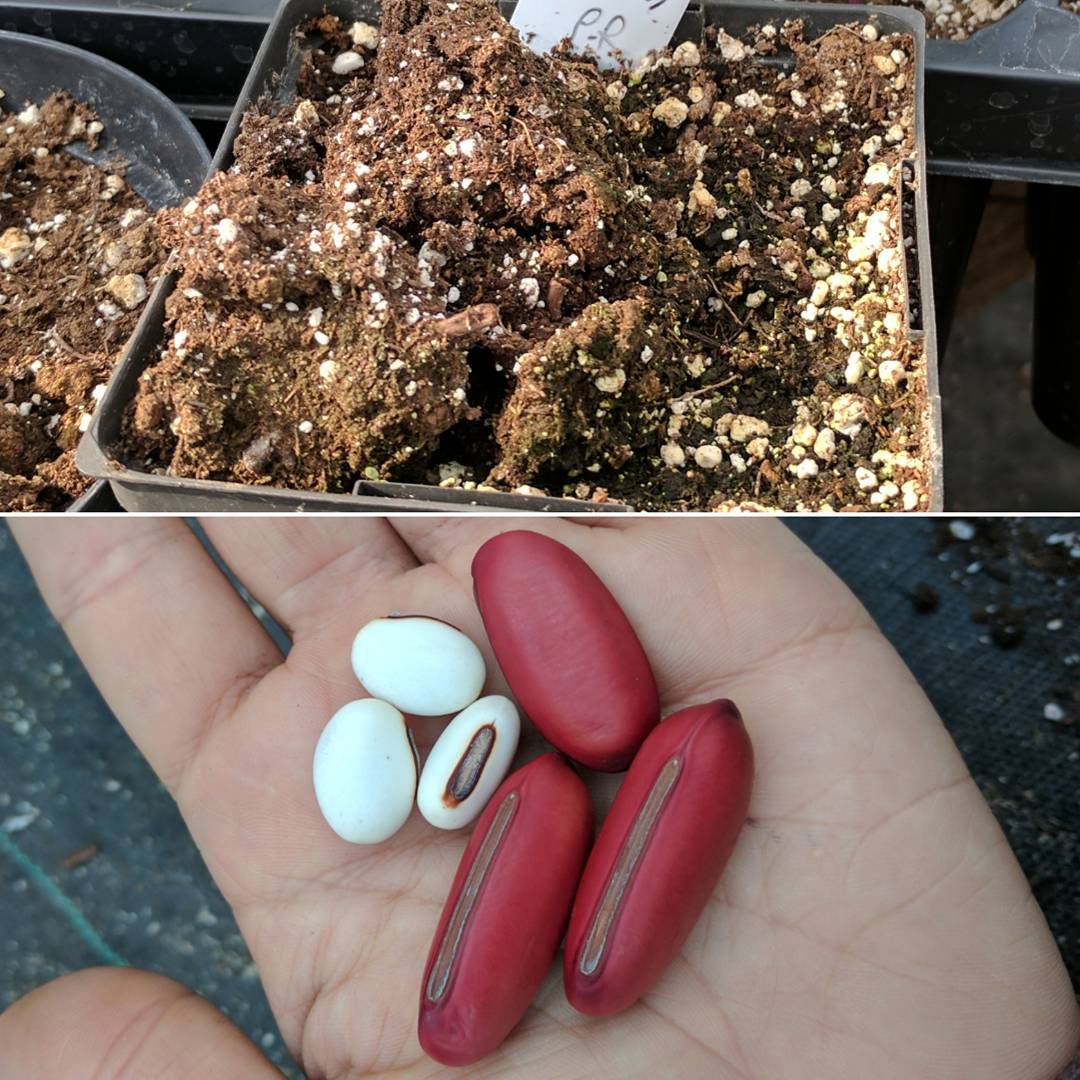 The purpose of this study will be to assess the value of sword beans as companion plants for tree crops in temperate climates, especially during the nursery stage. Weed suppression around the base of trees is a common problem facing farmers who propagate trees (either for a nursery business or as crop plants), and Canavalia may be a solution. Just a single plant may be able to adequately suppress weeds and grass that would otherwise siphon away vital water and nutrients from a developing tree. The nitrogen fixing abilities of sword beans, possible allelopathic (inhibitory) effects on various plant pests, along with their use as food crops, make these plants very compelling objects of study.

If we gain access to seeds of other species in genus Canavalia, we will happily include them in this ongoing project.

Researcher background
I am one of the co-founders of the Experimental Farm Network, and a farmer/researcher based in Elmer, NJ. My full bio can be found on the "About" page.
Are you seeking volunteer growers or other types of volunteers?
Yes, seeking volunteer growers
How many volunteers do you need?
20
What will you ask volunteers to do?
You will be asked to grow out a small amount of sword bean seeds, either at the base of young trees, or (if no young trees are available) on their own. You will be required to provide periodic reports about the growth of the plant, ideally on a monthly basis, and a final report, by answering simple surveys which will be sent to you. Basic questions seeking qualitative observations are all that will be included in surveys during this first year (2018), such as "Are plants thriving?", "Are weeds being suppressed?", "Are plants flowering?", "Are plants fruiting?" and "If seeds have been produced, did they dry down? Do they appear viable?" Photographs of plants and seeds will be highly encouraged. If the plants produce seed, you will be asked to return 75% of all mature seed for evaluation and use in subsequent years.
Other requirements of volunteers?
All volunteers are welcome to apply for this project, and volunteers will be chosen based primarily on geographic considerations, in order to include as wide a range of locations as possible.
Is this a multi-year project?
Yes
Can volunteers expect to be able to keep some germplasm (seeds, bulbs, cuttings, spores, etc) at the close of the project?
Yes, of course
Anything else?
If anyone out there has access to sword bean or jack bean germplasm (that is, seeds of any plants in the Canavalia genus), please contact me either through this page or via email. Thank you!
Researcher Location

I'll be planting well over 100 Hardwood (oak, maple, sycamore, etc.) and nut (black walnut, hican, hickory, etc.) trees in the Spring 2020 and am very interested in using the sword bean plants as companion plants. The farm is just outside Norwich, NY.